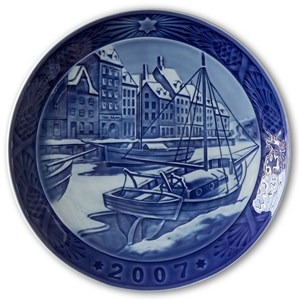 2007 Royal Copenhagen Christmas plate, designed by Sven Vestergaard, has the title Christmas In Nyhavn. In 1670 King Christian V inagurated The New Harbour Channel, otherwise known as Nyhavn. Nyhavn was originally built as a quarter for people who earned their living from the sea – merchants, sailors, sailmakers, etc. Owing to Nyhavn’s close proximity to the Royal Danish Theatre, however, it soon became very popular with both the respectable citizens of Copenhagen and the artists of the day.

Famous artists such as the playwright Johan Ludvig Heiberg, the composer August Bournonville and the writer Hans Christian Andersen referred to Nyhavn as home.

The 2007 Christmas Plate invited us into a snow-covered Nyhavn, where the channel is frozen around three lonely boats. Nine houses on the sunny side of the channel illustrate the varied architecture of the quarter. The third house from the right was home to Hans Christian Andersen on a number of occasions.

Nyhavn also played an important role in the life of artist Sven Vestergaard. He went to art school in Nyhavn and spent many an afternoon painting the charming and colourful houses in this special corner of Copenhagen.

Pre-owned, Reduced or Sale items are not available for purchase on 0% Finance