A brief history of the now redundant, Rolex Oyster Quartz 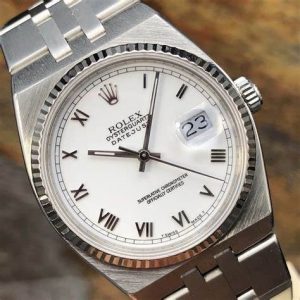 This beautifully crafted timepiece was once named the finest mechanical quartz movement watch in the world!
And so it should be; it has never tried to be in competition with any other watch than itself. In the 1970’s the quartz movement threatened both large and long standing respected watch houses by its unconventional battery powered movement. Watch specialists like myself forget that companies like Seiko(the master of quartz innovation) had started their company way back in 1881 under Kintaro Hattori. Meaning they had a good perspective of the market place. Suddenly the conventional manual and automatic watches were partly out of fashion due to the curiosity of this new digital and analogue sensation even to the point of watchmakers themselves questioning the security of their profession, with many less watchmakers training at this period.

However, if there is one thing we can always rely on and that is this-Rolex do everything with an accurate sense of the current market place. That is one of the reasons why many ROLEX collectors I have come across own one ,or more than one of these Oyster Quartz timepieces. Including myself.

RL Austen last year had the privilege of servicing and refurbishing a rare (according to Rolex UK) 18ct white gold diamond dial jubilee pyramid dial early oyster quartz. The lucky owner and I discovered it was very hard to put a value on it because of its scarcity. it was a truly stunning watch. They also being quite the expert on Rolex, informed me that my own Oyster quartz in steel accompanied with a white gold bezel is now hard to find because of the limited availability out there for a white gold 18ct fluted bezel. (see introduction picture of it above). 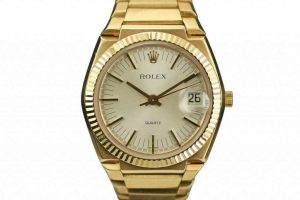 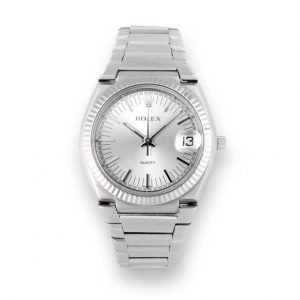 A rare early 18ct white gold model above with the early 18ct yellow gold one above that. These timepieces are of the collectible nature that demands specialist auction only sales.

The earliest example (image above) was a limited series date 5100, and had a Beta 21 movement. This sculptured heavy case, as you can see by its shape, is extremely high quality. Back in 1972 (I was 11) this was the ideal style! Fashion changes, as peoples demands and designs change. Fashion finds it hard to keep up with itself, which is why Retro watches are so popular decade after decade.

This model is pre-quartz chronometer. I Personally have always found the early Oyster Quartz dial was too bare. It needed those classic written lines which were “superlative chronometer officially certified” engraved on the dial.

The second generation Oyster Quartz models (I call the “loud tick”) because in a silent room at night you can distinctly hear the seconds tick away, at no extra charge from Rolex too!

A nice example below of a Rolex Oyster Quartz Datejust Chronometer Yellow Rolesor. The most popular one sold to the market place. 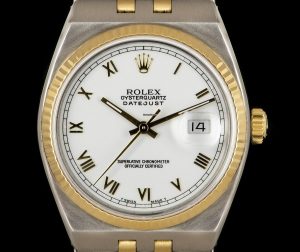 So then- how rare is a Rolex oyster quartz both now or in the future?

It has been estimated that fewer than 25,000 Oyster Quartz watches were made, which makes it one of the rarest regular production watches Rolex has ever produced. (To put the number 25,000 in perspective, remember that Rolex made almost one million watches in 2004 (no. not verified) and the Oyster Quartz was in production for nearly 25 years.) 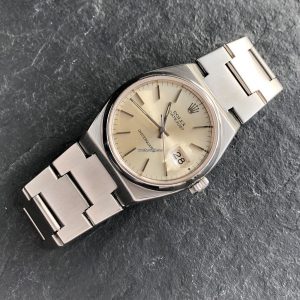 Rolex 1978 model 17000. note on the dial it is an early non chronometer model , flat slab type link bracelet. Not so pretty as the later Jubilee bracelet. But that is the 1970’s for you. BIG BOLD AND BRASH. Think of it like remembering visually a 1970’s Ford Zodiac estate car!! Actually, please do not think about or Google that car!!!

The first 5100 (very rare) was made in 18ct gold only in 1000 numbered pieces. It also boasted Rolex’s first adventure into the sapphire glass. Their rapid development soon produced in 1972 a Rolex in house movement, dismissing the original Beta one. This is typical Rolex, who with their iconic reputation take their timepieces to an even greater level. They still have this insight to move forward as much as possible today. It is as they would say “The Rolex way” It is not arrogance, but more intelligence.

Let us now look at the specifications for a more modern 1990’s model the white gold Rolesor steel model (17000).

DIAL : Date aperture at 3 o’clock in various colours including blue; white Roman, champagne and black as well as some diamond options

MOVEMENT: It was claimed at launch that it was the finest quality quartz timepiece in the world, and arguably over engineered. It boasted a combination of mechanical and quartz technology with jewels. 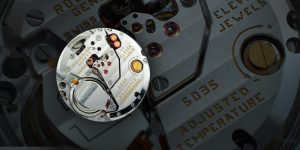 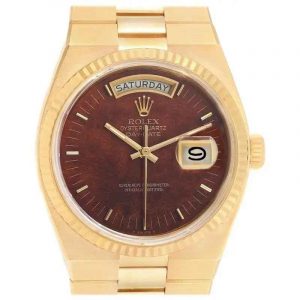 10 REASONS WHY YOU SHOULD CONSIDER BUYING ONE: