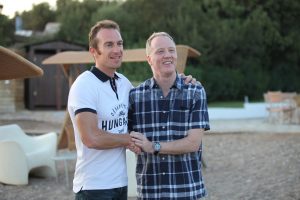 Away from work, my soul lies in the ocean, I call my self a surfer, sometimes a cold water surfer, I like the solitude that brings. The thing for me about surfing is that it requires no technology, no machines, no engine to assist you. I have the same interest in Free Diving, it’s just you, one breath, no assistance, no motor, no engine, no pollution. You can’t pollute the ocean surfing or free diving.

In 2017 I was attending one of the Tudor training courses in London where Sven announced the latest sales incentive would be called ‘Take A Breath’ a Free Diving course with my diving hero Morgan Bourc’his. Within a second, I had decided that if we were lucky enough to qualify, I would make it my ambition to not only attend, but dive deeper than anybody else. I wanted to win!

I just could not believe my luck when weeks later Austens got a call from The Tudor Watch Company, that a delegate from R L Austen would be invited to attend the Tudor ‘Take A Breath’ incentive. Please let it be me! Please!

Can you just imagine my joy, when I received my invitation to go to Greece to dive in the crystal clear waters with Morgan and 20 or so like minded Tudor delegates. Utter, Utter Joy!

Then I realized that I don’t actually own a Tudor watch. So how can I  go on a Tudor diving incentive without actually wearing a Tudor diving watch? This is where my friend and colleague (now manager) Josh stepped up and told me that I could wear his…Brand New.. I add, Tudor Pelagos. Oh, how perfect that could that be. Josh usually wears his Pelagos on the Titanium bracelet, but as I didn’t know if I would be diving in my own ‘Budgie Smugglers’ or a wet suit, it became very obvious that the Rubber strap was the obvious choice. 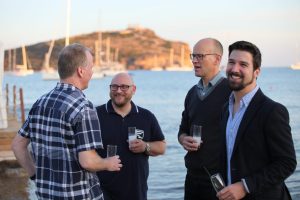 Then at last I was there, at Cape Sounio near Athens, full of hope. I don’t mind saying that this was the happiest time I have had in many years, I was truly in my element. 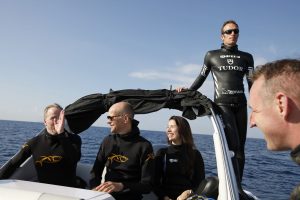 Free Diving is a very newly recognized global sport. Records are being made all the time. Everybody on this incentive was capable of making a world record. In fact one of the delegates came from a country with no free diving records at all, so he became officially the first person from his country to go into the Free-Diving record books! There are very strict rules to Free Diving, too many to say here, but there are strict protocols to follow. If all the protocols have been followed the Official Judge will give you either a Fail, OK, or ‘White Card’. Only ‘White Card Dives’ are recognized for the records. Play the video below with the sound on, and you will see just how relieved I was when I heard ‘White Card – Bravo!!’

This dive was 16 meters. I only had one attempt at it, and right from the start I was surprised that from the top, although the water was crystal clear, I could’t actually see the sea bed or the 16 metre weight with the depth record card that I needed to retrieve and bring back up to the surface. The pressure on your ears is almost instant. The trick is to de-compress regularly by pinching your nose and blowing. The second trick is to relax, do everything slowly, don’t use excess energy. By the time I reached the 16 meter marker, my body was beginning to scream for air, but I knew I still had the return journey upwards. In the training we were told that even though your body is desperate to breath, you can actually keep going through it. I got the card, turned, and upward, then I knew I had enough breath to get to the top. Remember the protocol at the top! Googles off, OK hand sign, say to the judge ‘I am OK’..Done! White Card.

Somehow I acquired the nickname 16 metre Peter, which has since stuck.

It was a fantastic 3 days I will never forget, I met some fabulous people, and was made to feel very welcome. I would like to say a huge ‘Thank You’ to Tudor watches for giving me the chance to realise one of my true ambitions.

Maybe someday I will go deeper; 20 metre Peter has quite a ring to it.